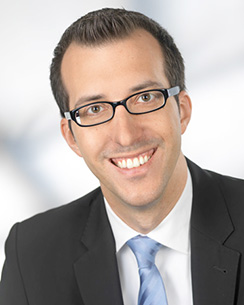 “Knowing that a new product or a radical product innovation has to compete for resources with other established products in the organisation, it is highly important in an established business to create so called “safe havens” for new innovative products which are still in their “children’s shoes”.” – says David VADNAL from Sberbank.

Are today’s corporate banking products fit for the modern world?

If we look at the developments during the recent years we can clearly see that digitalisation and innovation have not only arrived and played a huge role in retail banking but have also spread more and more into the corporate banking world.

In the area of trade finance for example where digital trade platforms are being built in order to facilitate the processes e.g. in supply chain finance and consequently improve TTY (time to yes) and TTC (time to cash). Also blockchain has arrived in corporate banking, where this technology is for example being used in order to “revolutionise” the handling and exchange of documents in trade transactions as well as for improving the security level, thereby making fraud and falsification of documents more and more difficult. In the area of payments services and cash management serious steps have been undertaken in order to improve usability of systems & applications and help corporate customers to integrate with their own internal applications and software.

Still a large number of traditional banks have been approaching the large corporate segment with mixed “emotions”, a lot of them still being of the opinion that in this segment digitalisation and technology will not play such an important role as they do today in retail banking. We will see how the role of FinTechs in this area will evolve within the next years. Whether they will remain in the role as providers for technical solutions, therefore acting as partners of traditional banks or whether they will also take on the role of competitors, trying to get their share of the cake, as they have done in the area of retail banking.

How to strengthen the awareness of new intelligent banking products?

Well, firstly I would say, we need to distinguish between the awareness within the bank, or more generally speaking within the organisation and the awareness of customers towards new and intelligent banking products or services.

For strengthening the awareness of the customer related to new intelligent banking products, I believe this is part of the marketing and sales campaigns which are used for making the advantages and features of a new product known in the market and raising the customer need to buy or use such products. Besides traditional advertising, today presence on social media channels is of utmost importance and needs to be accompanied by an omnichannel sales concept.

On the other hand, strengthening the awareness for new intelligent banking products within an organisation, which has the vision to develop such products and services, is where I would like to put the focus on, as this is a highly challenging task and I have been personally highly involved in such processes within the recent years.

According to classical product life-cycle management, the products that are part of an organisation’s product portfolio run through different stages of “maturity”, thereby requiring different treatment – in terms of further development/improvement which triggers the need of further investments, in terms of differentiation, meaning adding features which will enable the organisation to create a value added for the customer compared to competitor products and further on.

Knowing that a new product or a radical product innovation has to compete for resources with other established products in the organisation, it is highly important in an established business to create so called “safe havens” for new innovative products which are still in their “children’s shoes”. Therefore, bottom-up or top-down strategies need to be developed, which will result in the creation of awareness for the “new intelligent banking products”. Subsequently projects for identifying and developing such potential new products and services need to be given time and resources from the beginning on, and have to be clearly separated from the established ones. Organisations therefore shall separate resources for established products, growing and developing products and future products which are just about starting to be created. Only at a more mature stage, such new product innovations shall be measured against other more mature ones and start competing for resources according to business potential. Otherwise new ideas for innovations will not have enough time and attention in order to grow and prosper.

David joined Sberbank Europe in 2007 and was in his first years responsible for the management of the network banks in Eastern Europe as Country Manager. He held positions as Chairman and Member of the Supervisory Board of several network banks and contributed to their successful growth before moving to Product Management function. David lives close to Vienna, is married, has two children and holds a master degree in Economics and Business Administration.

How Could Banks Withstand Profit Losses and Quickly Regain Their Financial Soundness to Promote Economic Recovery?

What will happen when economic development slows because of inflation,…

What to Expect Next in the Inclusion of Climate Change Risk and ESG in the Credit Risk Environment?

Could the new technological developments reduce the common key concerns…

The Relationship Between Individual Study Nurses And Study Participants

Find new ways and channels to communicate with your patients…

Manage constant digital transformation waves and ensure the security of…

Post-Model Adjustments: Understand The Sensitivity of The Risk Drivers to Economic Conditions

New methods and models to understand the impacts of climate…

What Is the New Agile Approach for HR Leaders?

Create space for crucial conversations with your employees What are…

Four Levers of Motivation: Want, Can, Should and Must

Empower your employees with more learning opportunities and accessibility  …

Creating a high-performance culture with rewards and recognition   What…

Procurement Digitalization, The Journey Towards Suitability and Growth

A short article by Saad Alshehri, Manager, Procurement Strategy and…

How Could Banks Create Their Own Ecosystem With Partners And End Users?

Embedded finance: Provide your customers with the right financial product…

Copyright Allan Lloyds Group 2023 - All Rights Reserved
Back To Top